Landon is making changes to its athletics program to ensure the well-being of our boys and to align the structure with the school's mission following recommendations made by the Athletics Philosophy Committee. 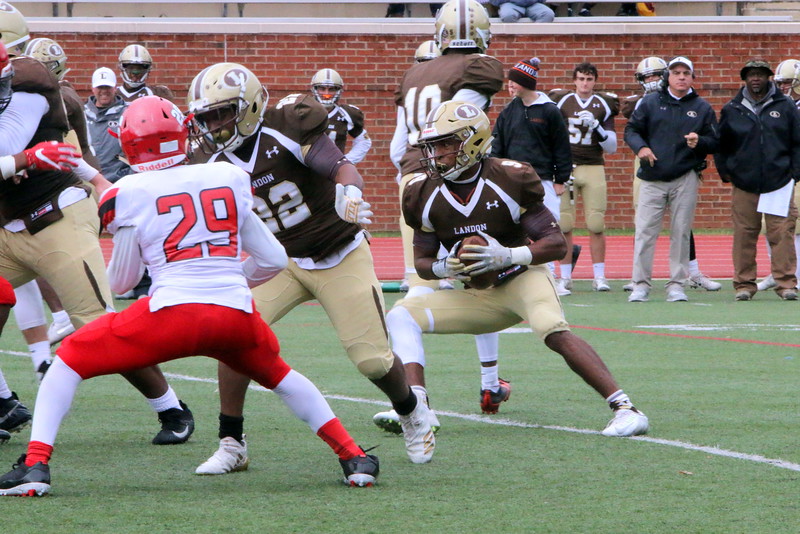 Landon is making changes to its athletics program to ensure the well-being of our boys and to align the structure with the school's mission following recommendations made by the Athletics Philosophy Committee.

The Committee, led by Director of Athletics Bill Brady, included teacher-coach-mentors from all three divisions, varsity coaches, and athletics administrators. It met this year to look at a variety of questions related to the program, including football.

"Among the topics this group wrestled with were how we could maintain strong student engagement in football while keeping it as safe as it can be," said Headmaster Jim Neill. "Considering the smaller number of younger students in recent years who signed up for football, recommendations from both the medical community and groups such as the NCAA and the NFL, and Landon-led conversations with Middle School football coaches at area schools, the decision was made to offer flag football in both the Lower and Middle Schools."

The switch from tackle to flag football for Lower School (grades 3-5) and the option for flag football in the Middle School (Grades 6-7) will begin in the 2019-20 school year.

"We hope and believe this change will increase participation in football and will offer both Lower and Middle School students the opportunity for more and better interscholastic competition in football, which has in recent years not been feasible," said Neill.

"This change will increase safety, meet age appropriate requirements, and include boys of all sizes during an important stage of their development," added Brady. "The Shrimp Bowl and Landon Cup will continue with flag football and soccer, respectively."

In the Middle School, there will be three football teams as the school moves away from grade level teams on the gridiron at that age. The advanced tackle team will be for boys with more experience or for boys whose size and ability can handle competition with other schools' advanced teams.

The beginner tackle team will be for boys who are learning tackle football for the first time or are best suited to competition against younger or less advanced teams.

The flag football team is for boys who love football but are not ready to play tackle. Flag football is only open to Grade 6 and 7 students.

"With these options we hope to increase the number of boys who are playing football and help them identify the right fit for their development," said Brady. "Please note that Form II boys who play the sport must play on one of the tackle teams as it is a move-up year, and we want to prepare them for the Upper School experience."

Intramurals will also no longer be an option for Form II boys in the fall. "Given that Form III students must play a fall sport, it's important we prepare them appropriately for the following year," added Brady.

Other new options for the Middle School include squash in the winter season (limited to 14 boys because of court space) and volleyball in the spring, after a test year for the latter. Winter and spring intramurals will continue to be available to Middle School students.

Landon is also changing its strength and conditioning program for Upper School students.

"The Athletics Philosophy Committee concluded that this program, as it had evolved, no longer served its initial purpose and instead in some ways undermined our mission of promoting teamwork, perseverance, fair play, and overall wellness," Neill said.

As a result, mid-day strength will no longer be offered, although students will have the option of participating in up to two seasons of after-school strength. Students in Form IV-VI (Grades 10-12) who wish to pursue a sport outside of school will have the opportunity to apply for one season of a new program called Contract Athletics.

"Contract Athletics would allow a student to gain an exemption out of one season during the academic year. It is for the Landon boy who has demonstrated a significant interest in a sport or activity and would like to further his development in that sport beyond the season that Landon offers it," Brady said. "Contract Athletics may also apply to a student who applies this interest to a sport or activity that Landon does not offer."

In addition to a high level of interest, a student must demonstrate a high level of commitment and unique achievement in this field, Brady added. There will be set timelines to submit a proposal in advance of the season, and a committee must review and approve it.

"We believe strongly in our athletics program and the many ways our boys can fulfill their requirements," Brady said. "Athletics is a set period of the school day, and it's important that we fulfill the mission of the school by maintaining our dedication to co-curricular athletics. Our teacher-coach-mentors, just like our boys, are devoted to this approach.We also recognize that the sports landscape is changing, and we need to be mindful of that student who has a unique skill and/or opportunity."

Building on the successful launch in the Middle School, the Athletics Department will also offer club volleyball in the fall for Upper School students. The team, coached by Upper School science teacher Beverly Sivaslian, who was an All-ACC and All-Region honoree as well as an Academic All-American at Duke University. Volleyball will be available to students in Grades 9-11 with a target roster of 15-18.

The school is also reducing the number of Grade 9 soccer teams from two to one. "Given that there are smaller teams at the JV and varsity level, we want to help boys identify their best option not only in year one but also for all four years of Upper School," said Brady.