This June, more than one dozen orphans in Nairobi, Kenya, will receive a special high-school graduation gift, a portrait painted or drawn by a fellow high school student who lives half a world away. The artists responsible for the portraits: 16 Landon upper schoolers.

This June, more than one dozen orphans in Nairobi, Kenya, will receive a special high-school graduation gift, a portrait painted or drawn by a fellow high school student who lives half a world away. The artists responsible for the portraits: 16 Landon upper schoolers.

Ashton Duplessie '15 founded the "Kenya Portrait Project" in 2014 after a summer trip to Nairobi to volunteer at Nyumbani Children's Home, which provides food, shelter, schooling and holistic care for HIV-positive orphans. That year, 13 upper schoolers spent their free time painting the portraits, and Ashton hoped the project might become an annual event. This spring, the project celebrates its fifth year, with Ashton's brother Chris '18 and Upper School art teacher Ricky Sears '99 now at the helm. For the first time this year, the portraits are part of the curriculum in Sears's drawing and painting classes.

"This is a wonderful way for the boys to see that art has an impact on others," Sears said. "And it is also a great way for them to learn portraiture. When they started working on the portraits, all they had was a photo of someone they knew very little about, so they were grappling with, 'How do I get the best likeness I can down on canvas or paper?' Later, they learned the backstories of these Kenyan boys and girls, and it evolved into something more — which is seeing how, through art, they can create something that is meaningful to others."

This last part hit home when Mary Lloyd Triplett Zaiser — who is the founder and director of KEST (a nonprofit dedicated to improving the quality of life in struggling Kenyan communities); the daughter of former Landon Assistant Headmaster Bill Triplett Sr., sister of alumnus Bill Triplett Jr. '63, and wife of Upper School math teacher Bill Zaiser; and has worked with Landon throughout the project's five-year run — visited the school to share stories, pictures and videos of the Nyumbani orphans with the Landon artists who created the portraits.

"[One of the other artists] told me that when he was doing the portrait, it felt like just another painting because he didn't know anything about the kid in the photograph," Chris said. "But he talked to me after the presentation, where we heard the stories of the orphans, and told me how mind-changing it was to learn about them. That's how I felt when I first did it. Learning their stories, you just feel this connection to the student you painted." 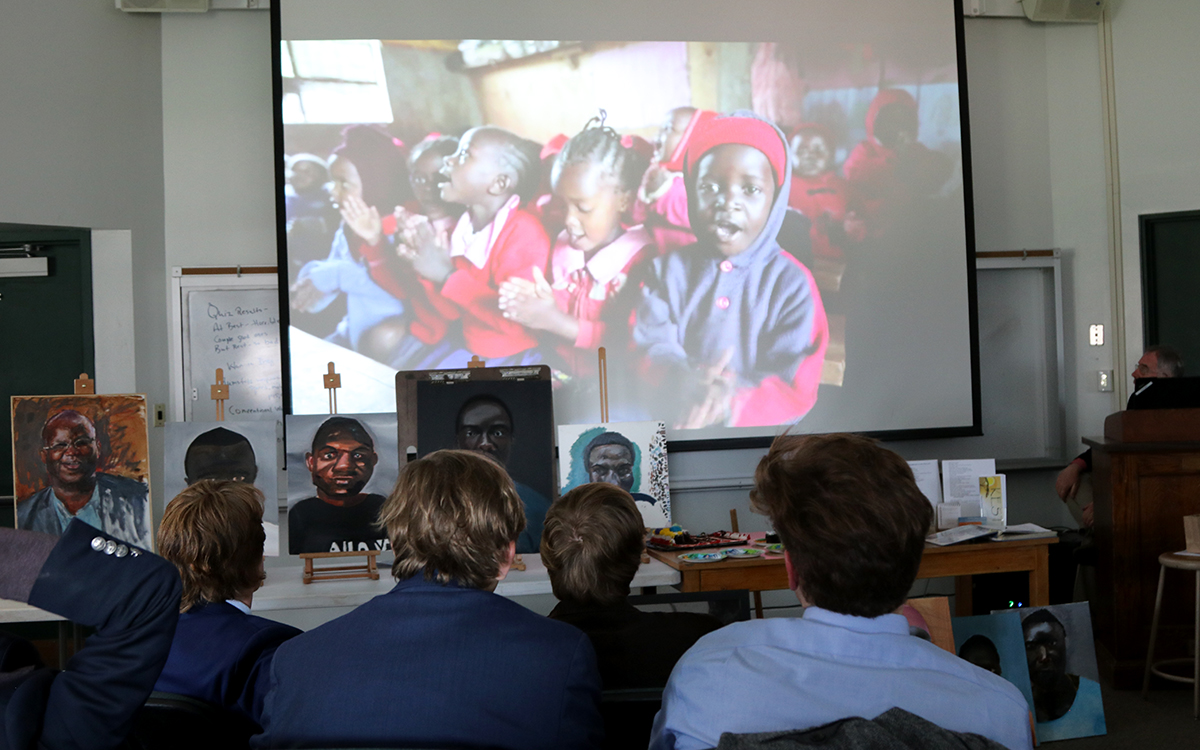