Fifteen Bears from the Middle and Upper Schools earned a total of 25 regional awards in the 2018 Scholastic Art & Writing Awards, which each year draws more than 300,000 submissions nationwide in 29 art and writing categories. 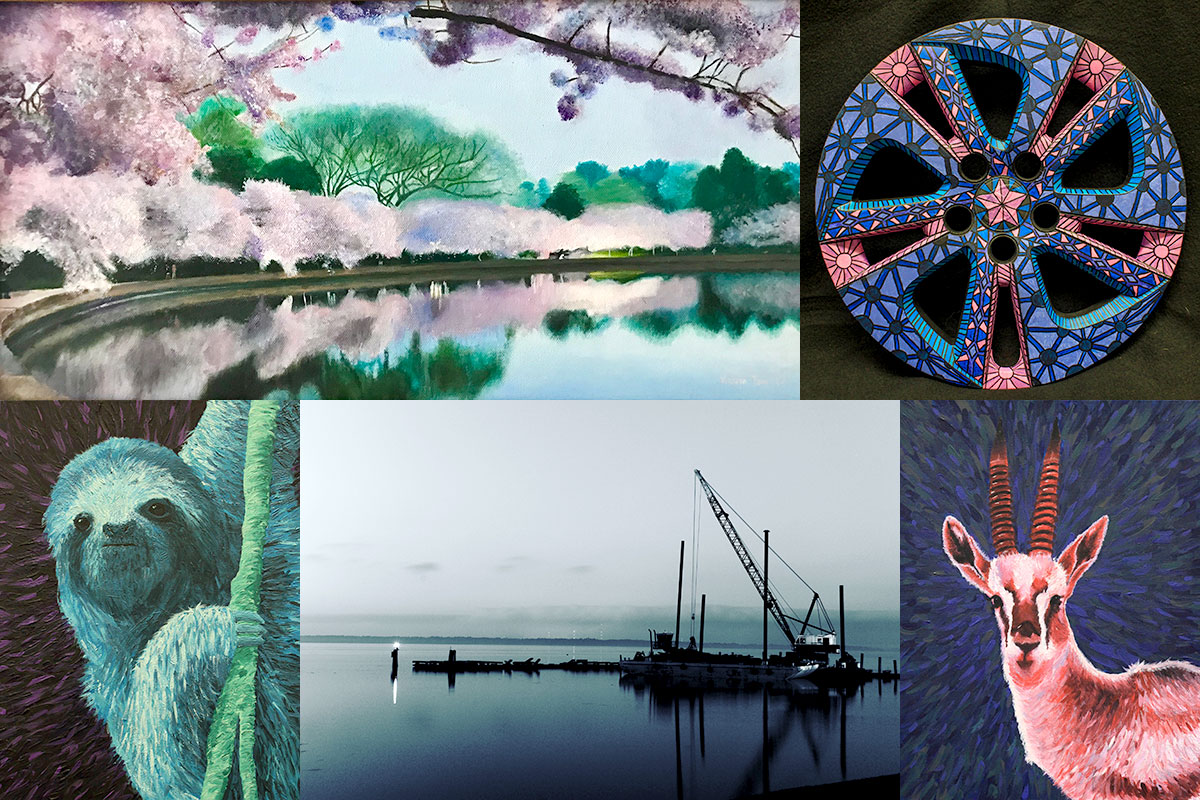 The vibrant beauty of the Tidal Basin in spring, the quiet happiness of a dad playing with his baby, the surprisingly inquisitive stare of a sloth: These are just a few of the moments Landon artists captured with their award-winning works in the 2018 Scholastic Art & Writing Awards.

Fifteen Bears from the Middle and Upper Schools earned a total of 25 regional awards in the competition, which each year draws more than 300,000 submissions nationwide in 29 art and writing categories.

Landon students won six Gold Keys, the highest regional award, seven Silver Keys, and 12 honorable mentions. The Gold Key-winning works move on to the national portion of the competition, where a panel of judges will select winners based on originality, technique, and "emergence of a personal vision." 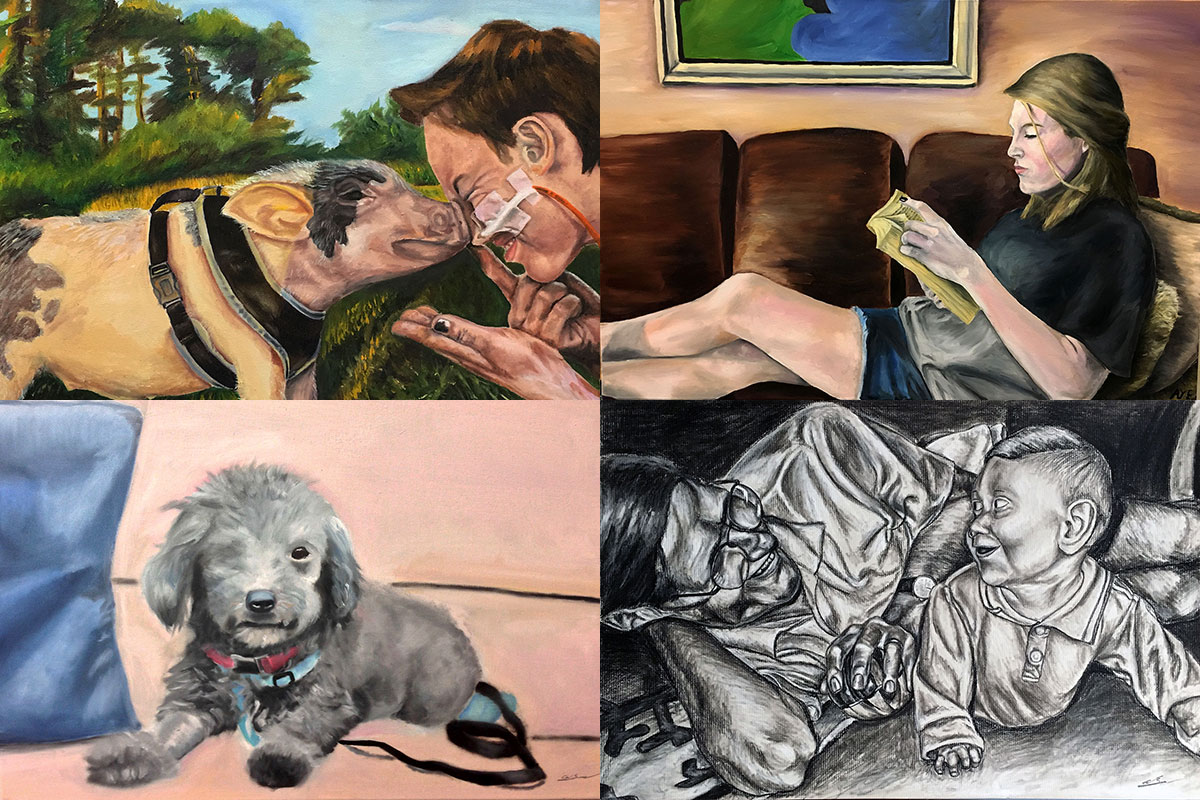 Andrew Engel '18 led the way with eight awards for painting and drawing — one gold, two silvers, and five honorable mentions — including a Silver Key for his overall portfolio. Among his works were (pictured clockwise above) the man-and-his-pig painting Sparky and Skye, which scored a Gold Key, Silver Key painting honoree Portrait of a Friend, and the father-and-son drawing Bobby and dog portrait Choptank, which both received honorable mention.

Fellow upper schoolers Matt Lowrie '18 and Alec Mearns '20 also won Gold Keys, Lowrie for his photograph Jenga and Mearns for the still-life drawing Eclectic Still (above left). And Eli Harrison '20 earned a Silver Key for his colorful abstract work The Odyssey (above right).

Spencer Durbin '22 set the pace in the Middle School with three awards — a Gold Key and two Silver Keys — for his detailed "boomerang" In the Air (above left) and intricate "hubcap" paintings Orange Bliss (above right) and On the Move.

Also in the Middle School, Palmer McTague '22 won a Gold Key for his antelope painting Prey (above left), and Jackson Neeb '22 received gold for his boomerang work titled Stolen Identity (above right), which he painted using a series of tiny dots.

Colin Flood '22 took home silver for his painting of a contemplative sloth, The Look of Judgement. (above left) Charlie Alberino '22 earned Silver Key kudos for his colorful hubcap-themed painting Five Owls (above center). And Henry Nichols '23 nabbed honorable mention for his drawing Kaleidoscope of Life (above right). 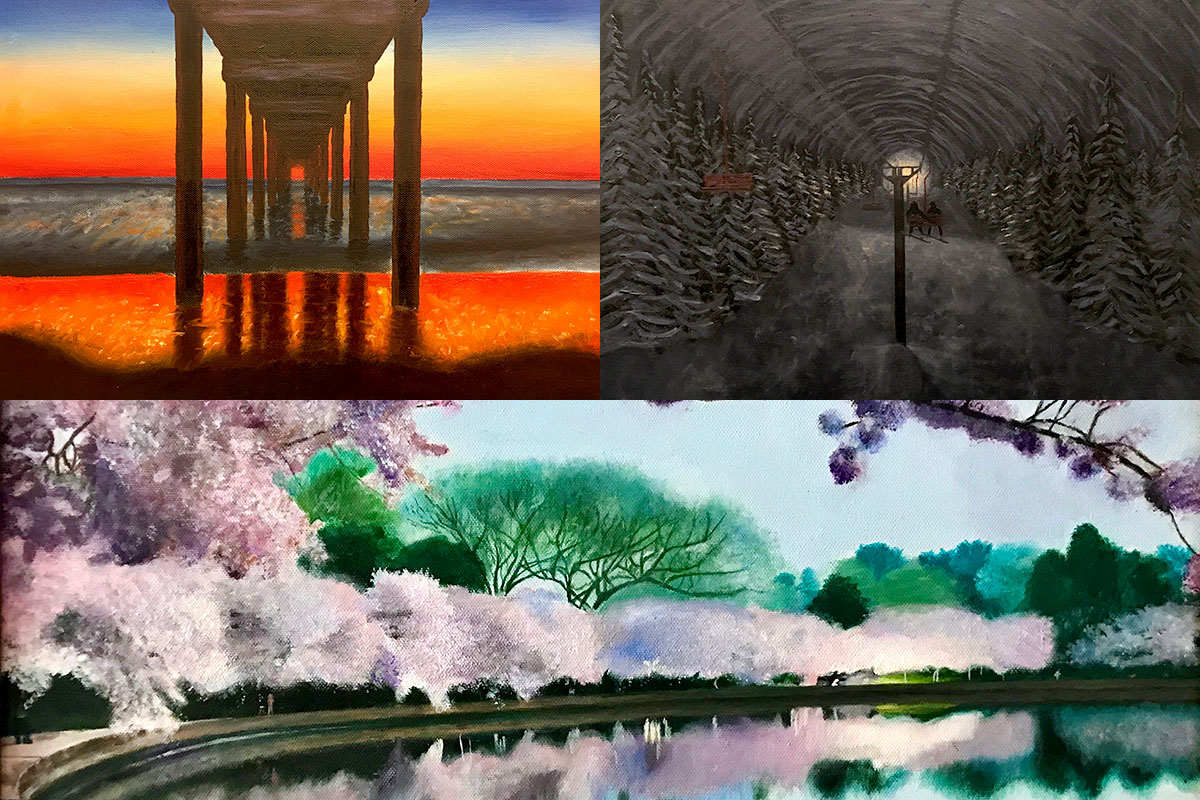 Past winners of the Scholastic Art & Writing Awards — which, since 1923, have sought to cast a national spotlight on teenagers, grades 7–12, who possess extraordinary artistic and literary talent — include painter Andy Warhol, photographer Richard Avedon, authors Truman Capote and Stephen King, and writers/filmmakers Robert Redford and Lena Dunham.

The 2018 national winners will be announced in March.