In an ethics speech delivered to his peers and teachers, trumpet player Presley '21 shares why he believes musical expression can help us confront our biases. 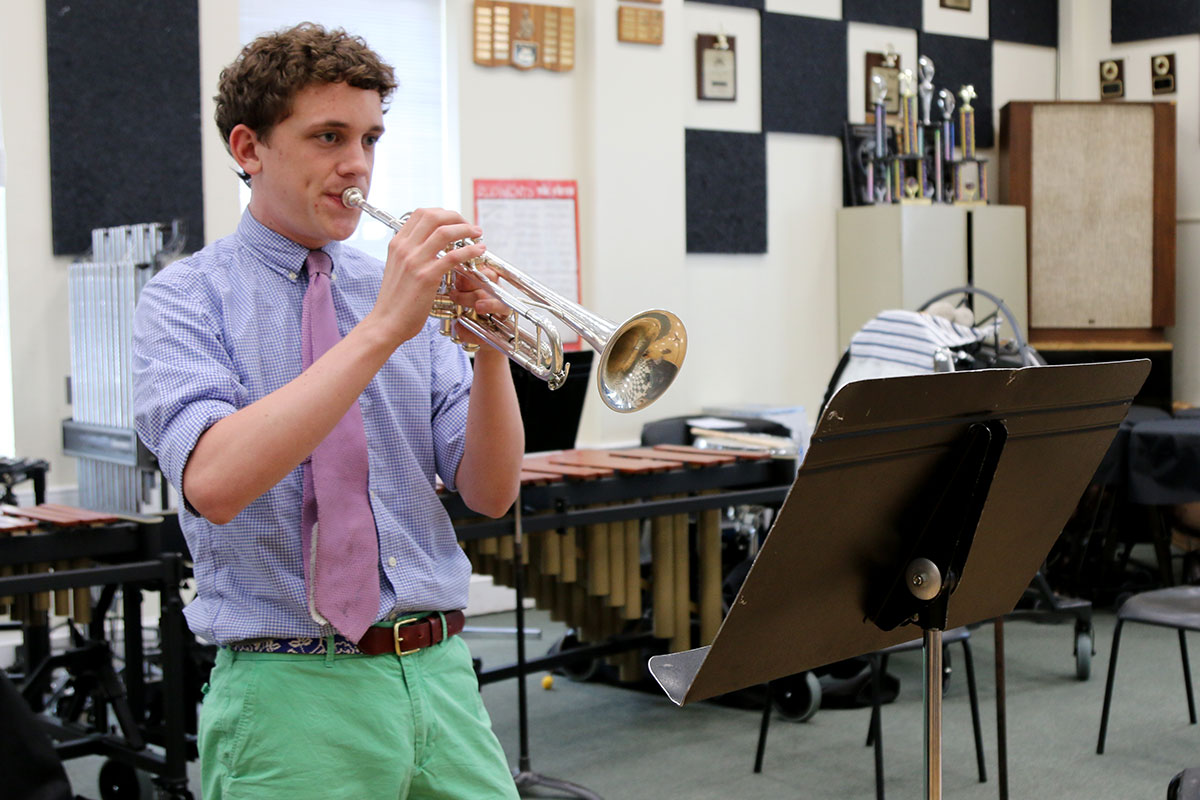 The following blog is a transcript of the "This I Believe" speech that Presley '21 delivered to his Middle School teachers and peers. Every eighth grader gives a "This I Believe" speech about a belief or experience that impacts the way he leads his daily life. A trumpet player in the Middle School Concert Band, Presley shares why he believes that musical expression can help us confront our biases.

"The beauty of life is to be outside the box, so that the box doesn't exist... To limit a human being to one mode of expression is really a crime."

In the past five years, there have been countless shootings of unarmed black men, black boys and police officers; and in the wake of this divisive election, I wanted to talk about something that brings everyone together. Music. I believe that music transcends boundaries and has the potential to bring us together.

Before I go on, though, I want to ask two questions. They are tough questions, but I think they need to be asked:

Thank you for your honesty. Now, how many of you believe that you subconsciously make decisions based on race? Please stand.

Again, thank you for your honesty. Please sit down. With all due respect, I believe that we should all be standing, because we all make judgments based on appearance, including skin color, every day of our lives. I do not know whether racism is a biologically based survival instinct as some believe, or a learned behavior as others believe.

Music connects these ideas and can start the conversation. Music can be louder than words and even actions. When you listen to a song, you're listening to rhythms and melodies of lyrics and instruments. Each song is split up into individual instruments, and then parts, and then notes. And each note is then divided into tones. Each tone is a different letter in a story.

Back in November, I was talking about jazz with Mr. [Andrew] Johnson, and he recommended a trumpet player named Christian Scott. In a concert video he sent me, Scott talked about the time he was wrongfully pulled over by a number of cops on his way back from a gig: They asked him to strip while pointing a gun to his head. He refused. Said he'd done nothing wrong. Said it was his right to know how he had broken the law.

After lots of threats and confrontation, a higher-up official finally came along and let Scott go. When he got home, though, he didn't get angry. Didn't get sad. Didn't yell. No, Scott spoke much louder. He wrote a song. He took his emotions and turned them into art. He used tones and melodic rhythms to express himself.

I want to go back to the Herbie quote for a second: "To limit a human being to one mode of expression is really a crime." When Scott was pulled over, he was being limited — limited by the stereotype that all black men are dangerous. Limited in that only one thing can define him — his race. The cops who pulled him over limited him. The cops, themselves, were committing the crime. They were violating Scott's civil rights, dangerously perpetuating the negative stereotype of African American men.

"The beauty of life is to be outside the box, so that the box doesn't exist." Society has created this box. A construction of implicit rules, guidelines and expectations that people must look, think, behave and feel a certain way. We use the box to limit others when there shouldn't be a box in the first place. Scott was the object of the cops' limitation. They pushed him into the box.

This applies to not just Christian Scott. If you meet someone who doesn't share the same characteristics as you — race, religion, ethnicity, gender, socioeconomic status — would you push that person into the box?

Our generation can change this. We cannot be afraid to talk about it. We will make mistakes. And, as jazz legend Miles Davis once said, "Do not fear mistakes. There are none." So if we take on this challenge, we could take a giant step closer to that place Louis Armstrong described as "a wonderful world."