What to bring: Water bottle, snack, non-marking sneakers. All other equipment will be provided.
Arrival/dismissal zone: Green

Squash is one of the most dynamic and fastest-growing sports in the U.S. and it is exploding at the junior level. Named by Forbes magazine as the U.S. top-ranked healthiest sport, squash is a great cardio workout, a lifetime activity that is ideal for family participation, and ideal training for other sports. There is also a high correlation between students who do well at Math and Science and those who enjoy squash, and often times squash caters to those children who may not have yet found their athletic niche. This camp caters to all levels and includes technical, fitness, and mental training both on and off the courts. Special attention will also be given to yoga and group exercise. Campers will meet the coach on campus, travel together on a Landon activity bus to the Chevy Chase Athletic Club for practice, and then return to campus.

Coach bio: Lucas Norman is a coach for

AussieNickSquash. Growing up in Australia, he established one of the biggest junior programs in the country and coached multiple top 15 nationally ranked players. As a player, he captained the University of South Australia’s men’s team that finished 2nd nationally. He has also won numerous state titles in both singles and doubles squash in South Australia. Coach Lucas is also one of the top-ranked players in the D.C. area.

Fun fact: Coach Lucas’s uncle won the World Open Squash Championship in 1986 and beat a player that had not lost in 555 matches. 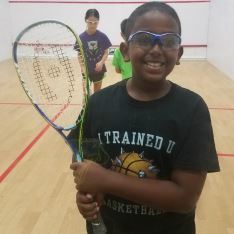 Stand at the T!