This camp is everything flag football! Run by Flag Star Football’s team of positive, high-energy coaches, campers will get tons of instruction and gameplay in a team-first, values-driven environment that allows them to make friends, get better, and HAVE FUN. Each day is divided between drills, stations and games that focus on competition, repetition, and football skill development. This camp is designed for every level of experience and every level of athleticism.

Rain Day Activities: In the event of severe inclement weather, our campers will be engaged in the following indoor activities:

We will follow the weather closely to make sure that campers get back onto the field as soon as the rain stops and it is safe to play.

Coach Carl is the Founder and CEO of Flag Star Football. After captaining the Harvard Football team and playing “professionally” in Spain, Carl took off his cleats, put on a whistle and slowly, slowly, alongside a team of incredible people, built Flag Star into what it is today.

Coach Richard is the most tenured, most knowledgeable, and most revered coach at Flag Star. Also a coach in our Bethesda league, Richard brings energy and enthusiasm every single day. He also brings us sage wisdom, maturity, and tales of what the world was like before smart-phones.

Coach Aaron is a former division one footballer at Howard University and has seamlessly made the jump into coaching. As a full-time member of the Flag Star team, Aaron is a leader, a teacher and, more times than not, the last person to leave the field, playing catch and making up games with whoever is ready to keep playing.

Coach Jeremy was born in Indonesia, moved to Virginia at the age of ten, and found comfort and community in the sport of football. He is undeniably the coolest and fastest member of the Flag Star staff and the man with the biggest laugh.

Coach Donato is a high-energy, positive-thinking, team-first guy who makes every game, drill, or field more lively. With a genuine love for the game and a passion for sharing that game with the next generation, Donato is an A-Team member all the way.

Company bio: Flag Star Football is an organization that loves flag football, loves working with kids and focuses all of their work on two common goals: GETTING BETTER and HAVING FUN. Flag Star coaches are great educators, great people and are singly focused on the development – personally, athletically, socially – of their players. We’re here to play football and we’re here to get better at football, but none of that can happen if we’re not also becoming better people and better teammates. Visit flagstarfootball.com for more information. 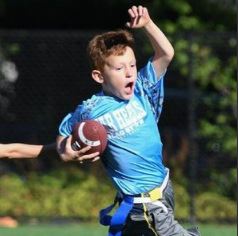