PREREQUSITE: Players must have previously attended a Next Level Lacrosse clinic or have played on a team for at least one season.

This camp is designed to develop the fundamentals and team concepts of girl's lacrosse. Our experienced coaches will provide comprehensive skill instruction with an emphasis on both individual and team offensive and defensive skills. Individual training will be provided for goalies. The camp will also feature daily competitions, awards and tons of game play. Players will be grouped based on age and/or skill level. Players will have an opportunity to cool down in the pool after lunch. All campers will receive a reversible jersey.

Rain Day Activities
In the event of severe inclement weather, our campers will be engaged in the following indoor activities:

We will follow the weather closely to make sure that campers get back onto the field as soon as the rain stops and it is safe to play.

Next Level Lacrosse is committed to providing terrific lacrosse experience that is intensely focused on player development and character formation. Players at all levels will improve significantly through professional coaching and carefully designed training programs that stress proper technique and tireless work ethic. Our expert coaches serve as role models and will strive to teach your daughter how to be a fearless leader, selfless teammate, and a mature competitor.

Courtney Cook is Director of Next Level's Girls Lacrosse Program, as well as the Director of Girls Camps/Clinics, Little & Big Spartans and LaxKids. She has been coaching lower level through college level girls on Long Island and in Maryland for the past 11 years. On top of her Director duties, Courtney coaches camps, clinics, and is head coach to both the 2028 and 2027 girls travel teams. She was the Asst. Coach and Goalie Coach at Farmingdale State from 2013-2015, as well as coaching numerous travel teams on Long Island. In 2015, Courtney moved to MD and has been with Next Level ever since. 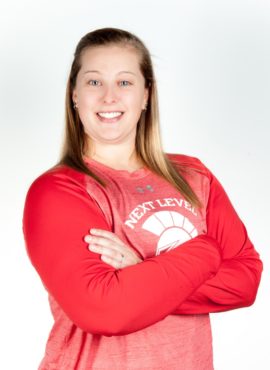 Kim Hargett is a D.C. native who played lacrosse and field hockey at Wootton High School before continuing her career at Florida State University. Kim teaches 6th grade in Fairfax, VA and has been coaching with Next Level for the past 8 years. On top of coaching clinics and assisting with managing Next Level's Summer Sports Camp, Kim is currently the Assistant Coach of the Next Level 2028 and 2027 girls travel teams.

Alicia Lamkin grew up playing on Next Level youth teams where she learned the fundamentals of lacrosse. She graduated from Walt Whitman High School in Bethesda, Maryland in 2020. Alicia played lacrosse and soccer throughout high school. Two of the three years that she played on varsity, she led the team to the Maryland State Semi-Finals. She is committed to play lacrosse with the Claremont-Mudd-Scripps team where she will attend Scripps College in Claremont, California and plans to major in psychology.   Alicia is thrilled to have an integral role in the development of the next generation of youth players!